Reverent Nancy Scott of the Anglican Parish of Swan requested an inspection of the Church which was constructed in 1839.

The church had been extensively renovated and reconstructed in 1998, including the provision of a completely new roof.  It was discovered that, as part of the construction process, the trusses which were introduced were made out of heavy timber.

The 2 main trusses which spanned the width of the church were seated not on the walls of the church but on steel columns which were put inside the line of the internal leaf of the external walls.  These columns were attached to the adjoining brickwork by steel ligatures built into the brickwork.

The diagnosis was that the most likely cause of damage to the brickwork above the southeast window was that the column head has been pulled northward relative to the balance of the wall by shrinkage within the new timber used for the truss.  The prognosis was that if the crack were to be repaired, recurrence need not be anticipated.  With the root cause identified, repairs were then conducted to permanently remediate this important Heritage site. 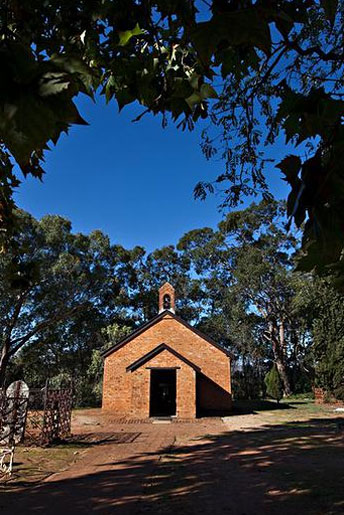