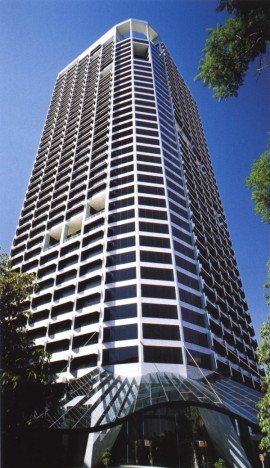 The Award is named for the pioneering Architect of the Swan River Colony’s early years. Jewell was responsible for many prominent buildings that were built in the mid-19th century, including The Deanery, the original Perth Railway Station and the east and west wings of the State Building. The Award recognises enduring projects that remain of significant contemporary importance for Architecture in Western Australia.

Completed in 1993, the iconic modernist skyscraper consists of 42 levels of reinforced concrete framed offices. The adoption of a highly economical system of five pile-assisted concrete rafts over problematic soils consisting of inter-bedded sands and clays won national acclaim for Airey Taylor Consulting for its innovative solution to foundation challenges.

The structural design, which featured post tensioned radial beams spanning 14m and cast-in-situ floor slab offered ease and extremely rapid speed of overall construction, and allowed 23 floors to be completed in the first nine months of 1990.

Congratulations to Harry Siedler and Associates, who continue his legacy of outstanding modernist design.

More information about the Awards is held at the Architecture AU magazine.